Formation of the MCC Baseball Section

The MCC were involved in Baseball as early as 1857, when a group of Cricketers played a game of baseball held in the Exhibition gardens in Carlton, 18 months before the first game of Australian football. It featured some astronomical scores, it is likely the game was more of a modified version of rounders and cricket, as Baseball in America at the time was still developing from the medley of town ball games.

The 1860’s had seen various efforts to organise baseball in Melbourne led by S. P. Lord and others however the game never progressed beyond games in the Carlton Gardens.

The 1876 Philadelphia Centennial Exhibition, which was attended by Ben Wardill, would have emphasised to him that the United States was on the verge of becoming an economic world power and that Baseball would be an important link between the new colony and the new world power, just as the cricket was to be with the Empire.

The 1880’s had not only seen a growing interest in baseball, but American influence in the colony had become more pronounced as well. American interests used the Melbourne Exposition of 1880 to market a wide variety of industries and inventions which had taken hold by the end of the decade and many foreign observers came to regard Melbourne at this time an ‘American-style’ city.

With the visit to Melbourne of the US man-of-war Enterprise in October 1885, Melbourne Cricket Club members played the officers of this vessel in a series of games of Baseball which were the first ever played on the M.C.G. Included in the Australian 9 were J.P. Tennant (captain), W.H. Moule, T.J.D. Kelly, C.H. Ross, C. Allen, Power, Usher, and Drs. Willmott and H.A. Embling. The Americans won 23 to 17 but had the local’s knowledge of the rules been as sound as their play, the scores could have been reversed, admitted one of the Enterprise crew.

By way of celebrating the anniversary of American Independence Day in 1887, a team from the American Baseball Club established in the city were opposed by nine cricketers under the captaincy of MCC’s Mr H. F. Boyle, but as only 3 of the MCC team had any prior experience of the game they were beaten by a little more than two to one.

During the winter of 1887 it was difficult to play matches as it was a particularly wet one, however MCC members began practicing the game of base-ball in the Albert Park near Middle Park Station and at the M.C.G. between August and September.

To celebrate American Independence Day in 1888, the MCC Baseballers played the Melbourne Baseball Club who were predominately American expatriates (later to be renamed the Metropolitans).  The game between the M.C.C and Americans was won by the MCC 35-29, it was played in Albert Park near the Middle Park railway station.

Billy Bruce, Cotter the MCC Club professional and a few second eleven cricketers were included in the team to play for the MCC and his impact on the game was described in the Argus of July 5th 1888:

“The scores were tolerably even until Bruce, of the Melbourne took the position of thrower, and Cotter went behind the striker. Bruce performed the equivalent of the “hat trick” in cricket, or, in other words, he put their opponents out before they had even scored a base. Their catching gave the cricketers a decided advantage, but their opponents could handle the bat with more telling effect.”

The games against the resident Americans progressed to regular practice mid-week in the afternoons through June and July and then practice games between the Melbourne Baseball Club, Melbourne Cricket club and East Melbourne.

All was in readiness for the American professionals visit in December 1888, the White Stockings team had been League Champions 5 times since 1876, and the All-Americans were full of players who would become legends in the game. After the White Stockings had defeated the All–Americans 5-3, it was time for the MCC’s team, led by Billy Bruce, `to try conclusions with Chicago’. It was an unhappy experience for the newcomers to the game, who were absolutely outclassed by `the brilliance and wonderful precision of baseball’s best’. Mercifully the papers of the day made no mention of the scores in this encounter.

The difference in the teams was described in the Argus, 24th December 1888:

“The merit of the pitching was best judged in the scratch match, when the Melbourne cricketers tried to play Baldwin, his pace was altogether too great and in most cases the ball had passed them before they struck! The majority of the cricketers who tried, and who have been practising baseball for some time past, failed to hit a ball. Bruce however, pitched in very good form for a novice.”

At the MCC Committee meeting of 27th March 1889, the Committee confirmed ‘Nominations for Messrs. Ryall, Ross, Dickson, Wiman and Sampson to the Baseball Committee’ and ‘Necessary expenditure with regard to the engagement of the Scotch College ground in connection with baseball was authorised’. The Previous year’s 1887/88 MCC Annual report indicate that expenditure for Baseball related activities had also been approved. The Scotch College ground was opposite the cricket ground on the other side of the Jolimont rail yards. Courtesy MCC Archives, Committee Minutes, 1889, Page 236 (Archives, MCC Committee Minutes, 1889) 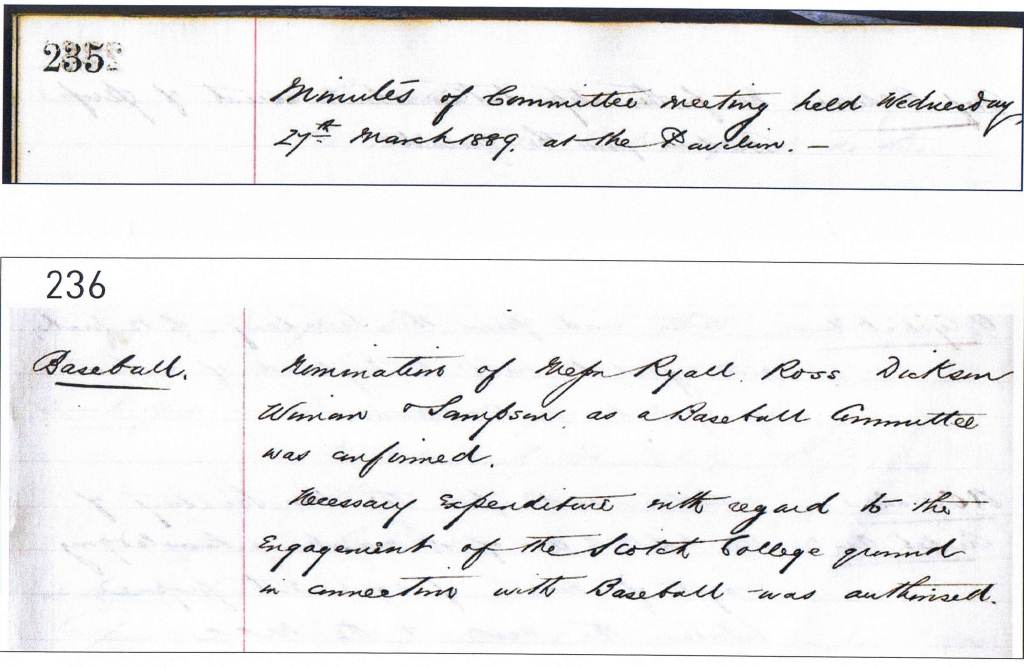 Minutes of MCC Committee Meeting 27th March 1889 held in the Pavilion detailing the nominations for a Baseball Committee.

By 1889, the MCC Baseball team began appearing in uniform, for the match against Victoria in March 1889, the Melbourne Cricket Club team had turned out in their new club colours, the costume chosen by the club being dark-blue shirt, knickerbockers and stockings, with red, white and blue cap and sash.

For the first intercolonial matches at Easter against the South Australians, three MCC players – Billy Bruce, Fred Burton and Charles Ross were selected to represent the colony. Major Wardill felt that the intercolonial visit was the start of bigger things, claiming that `an Australian team will not be long in attaining form good enough for visiting America’. His vision was not shared by the Australasian, which concluded its report with a discouraging `we have our doubts’.

The onset of winter did not bring an end either to the formation of new teams, or the playing of matches. After some convincing wins by the MCC, it was reported in the Australasian, that `at present time, the MCC … can put out as good a team, if not better, than any other club in the colony.’

With so much activity in the game, the time had arrived for baseball to become more organised.

Contains excerpts from the book "Pavilions in the Park" by Alf Batchelder (Batchelder, 2005) and "The MCG: People’s Ground" by Keith Dunstan (Dunstan, 2005).